Well - we've been in Baby Step 4 for a while (invest 15% of your income in retirement), but now we're back in Baby Step 3 (save a 6 month emergency fund).

Truth be told - none of the above "emergencies" were actually ture emergencies. They were all things we knew we would have to replace and we should have been saving up for them in sinking funds. But - we were caught before our sinking funds were funded, thus turning those situations into "emergencies" - or at least making us decide to dip into our Emergency Fund to pay for them.

According to my projections, we should be able to have the savings back up there by the end of July - hopefully sooner.

So, that's what's going on with me. I'll try to update again soon!
Posted by Jennifer at 11:28 AM

Well, things have improved dramatically over the past few months.

Hubby got a new job with a 25% raise in his base salary, and the potential to earn very significant commissions (though I'm no longer counting on commissions!).

Our Emergency Fund is back to where it should be ($30,000) and we have even started putting money aside for the kids for college.

My pendant business is going great! Two weeks ago I had my best craft show ever, and I made $2,700 on that one day! Other shows have been good too, and the last two months my income was actually higher than my hubby's!

I have to say that it feels good to have a plan, and even when we get off track, we can recognize that we are off track and have a blue print for how to get back on track. (I'm referring to Dave Ramsey's Baby Steps!)
Posted by Jennifer at 8:20 AM

Well, things aren't going all that great. DH's new job isn't what we had hoped. He hasn't made a commission since he started 7 months ago. So, we have been living on just over 60% of what he used to make. Luckily I have been making some good money selling my pendants at craft shows, but our income is still seriously low, barely covering our monthly expesnes.

To make matters worse, we just got back from taking our family on a week long cruise. We had this cruise planned for months ago, and, in theory, we paid cash for it. That means, we paid cash when we initially paid for the cruise . . . BUT, there were lots of additional costs that I did not take into consideration.

Between everything, the bottom line is that our Emergency Fund is now down by $4,000 ($26,000 instead of $30,000). And what's worse is that it doesn't look like we'll be able to build it back up for several months - like probably not until next May! UGH!

DH is interviewing for a new job that would bring a substantial pay increase, so I'm keeping my fingers crossed - but still feeling very nervous in the meantime.

The road to Financial Peace certainly is a long one!
Posted by Jennifer at 11:24 PM

The money is definitely tempting to my husband (who wants new windows, new patio furniture, to remodel and expand the house . . .) but there is no way I'm giving up this security! Luckily our short term savings is starting to grow now too - up to $5,000 already. So, we should be able to get him some of the things he wants soon.

I have to admit that this whole process has turned me from a spender into somewhat of a saver. I actually feel a little reluctant to even dip into the $5,000. It is so hard to prioritize what to spend the money on. I just want to be conservative and spend our funds wisely.

Now we can finally begin (much too late!) to focus on saving for college for our 3 daughters. Our oldest is already 13 and will be going to college in just 5 short years. Not a lot of time to save the hundreds of thousands that will be needed.

Isn't it crazy - just as soon as something is crossed off the list, it's time to work on the next step! It's like the finish line is always moving!

But, I have to admit, when we began this process 3 years ago - being where we are today seemed almost impossible. I am so grateful to Dave Ramsey and all my PF Blogger friends for showing me the way and encouraging me to stay on track!

I am truly blessed!
Posted by Jennifer at 9:33 AM

Well, things are looking up a bit. May will be a big income month for us. My husband will get an extra paycheck (being paid every other Friday, with an extra Friday in the month); we are expecting a large tax refund of $7,500; I have several craft shows booked and am budgeting $500 (as most the money I keep in the business); we are getting a check from FEMA for $500 our flooded basement, and I have several babysitting days lined up accounting for another $200.

We will finally be able to start saving for college and do some much needed home repairs. The Dave Ramsey Plan really works!!! :)
Posted by Jennifer at 9:51 AM

BACK TO THE OLD WAYS

Well, I'm embarrassed to say that I have not been paying attention to our finances lately. I have definitely sort of reverted to the old ways. We have a good amount of money in our checking account and I have just been using my debit card willy nilly. This does not feel good.

Our Emergency Fund is substantial, but not complete. I have not looked at our budget in weeks (maybe months?).

I could make excuses and say that life has been busy - and it hasbeen, but when is it not? I have spent a lot of time applying to Craft Shows and focusing on my pendant business (which is going well), but a lot of people work full time and manage to handle their finances. I need to get back on track.

I remember someone saying that Baby Step 3 (Finishing the Emergency Fund) is even harder than Baby Step 2 (Getting Out of Debt) - and when I was in BS2 I found that hard to believe, but now that I'm here in BS3 I think they might have been right.

Looking forward to re-focusing and catching up on my PF Blogger friend's blogs for some inspiration!
Posted by Jennifer at 8:07 AM

Can We Really Live Without A Credit Card?

Well, we paid off all of our credit cards months ago. And we closed all accounts except one. Now the one we kept open is trying to charge us the annual fee.

I have no desire to ever use a credit card again, but I'm not sure I feel safe closing this last account. I know Dave Ramsey would advocate strongly to close the account. But something about having it does make me feel just a little more secure.

What do you think? Has anyone else closed all their credit card accounts?
Posted by Jennifer at 12:09 PM

Here is our budget for February.

My husband will actually be starting a new job on February 1st. His base salary will remain the same ($75,000) but his commission potential (on target earnings) will go up (to $150,000), so we will hope for the best but plan for the worst. In other words, to start out I will plan our budget without planning for any commission at all.

(On the other hand, he will probably be getting some extra money from his old job for vacation days he didn't take, etc. And, we are waiting to see how much his last big commission check will be - maybe as much as $10,000, which will finish our Emergency Fund with a little left over. So, we'll see how it all pans out.)

I have also budgeted low ($100) for my Jewelry Income. I am only doing one craft show in February (there aren't that many around) and I can't allocate too much of my earnings for income because I need a lot of money up front to sign up for the many craft shows throughout th year.

So, basically, I am planning our budget very conservatively.

The Misc. of $250 is for the bridesmaid dress I will be getting to be in my sister's wedding. The Kid's Misc. of $52 is for my daughter's dance lessons. 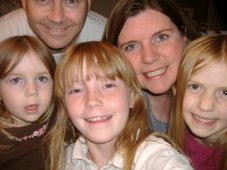 Read payday loan reviews and compare a variety of payday loan offers and apply for the one that best fits you.